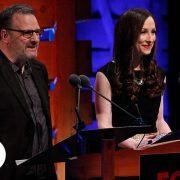 The prestigious BBC Radio 2 Folk Awards 2017 will be held in the Royal Albert Hall in London on Wednesday 5th April 2017. Julie is delighted to once again be co-presenting the Awards Ceremony with good friend and BBC Radio 2’s Folk Show presenter, Mark Radcliffe. For full details, how to get tickets for this exciting event; and to see a full list of nominees and performers, etc, visit: bbc.co.uk/events/e5qgwh

TV Series ‘Port’
The third series of ‘Port’; presented by Julie and her friend Muireann NicAmhlaoibh; has been broadcasting on BBC Alba TV over the last few months. The last 4 episodes (which includes 3 programmes showing the highlights from the entire series) are still available to view on the BBC iPlayer via the following link: bbc.co.uk/iplayer/episodes/b06vjl58  The series is due to air on TG4 in Ireland from April 9th.

May news
Scroll to top