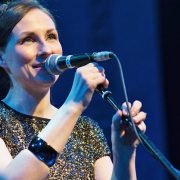 Julie’s last performance of 2016 was as part of the BBC ALBA ‘Cèilidh na Bliadhn’ Uire’ Hogmanay celebrations, live from Stirling and broadcast ‘live’ on BBC ALBA. If you missed it on New Year’s Eve itself, there is still time to catch it on the BBC iPlayer:-

As posted at the end of November last year, Julie was delighted to announce her involvement in an exciting and brand new musical line-up for the Music Network Tour project 2017. Performing alongside award-winning Kris Drever from Orkney, violin virtuoso Aoife Ní Bhriain and ground-breaking concertina player Pádraig Rynne, this group are currently in the midst of a nine show Tour throughout Ireland (with only 2 shows to go!).  Full line-up information and tour dates can be found here at the Music Network Tour site or at the Tour Dates page.

Celtic Connections is here again, and as announced also last November, Julie is to be involved in several shows.  Along with the band, Julie will perform at the Glasgow Royal Concert Hall Main Auditorium in an exciting triple bill with Altan and Mary Chapin Carpenter on January 30th.  She will also sing as part of the ‘Starless’ concert with Paul McGeechan in the Mitchell Theatre on January 27th. Full ticketing links and details can be found here. There will also be some surprise appearances from Julie during the festival…keep your eyes peeled!

Finally, the latest (& third) Series of ‘Port’; presented by Julie and her close friend Muireann NicAmhlaoibh; is currently being broadcast on BBC Alba TV. If you want to watch it ‘live’, the 4th Episode is being broadcast tonight (Monday 23 January) on BBC Alba TV at 10.00pm (http://www.bbc.co.uk/programmes/b06vjl58). If you have missed the earlier episodes you can catch them on the BBC iPlayer via the following link:- http://www.bbc.co.uk/programmes/b06vjl58/episodes/player