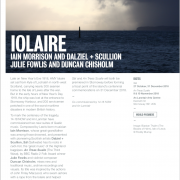 Following three sold out shows in Kings Place, London, Shoreham and Celtic Connections in Glasgow, Julie and the band received great reviews in The Times and The Guardian.

“A bonefide trad music star…her voice is flawless, glossy.  Fowlis can sing like a diva, but keeps it sweet.” (The Guardian)

“transfixed by her voice…the purity of her vocals.  Captivating…a masterclass in intimacy.” (The Times)

She heads to Manchester, Kendal and Inverness this week to continue her album release tour, plus further performances at Celtic Connections with the Scottish Symphony Orchestra and the Transatlantic Sessions.

Today, a new project was unveiled – a joint new musical commission with musical comrade Duncan Chisholm.  They are honoured to have been invited to create a new work, commemorating 100 years since the sinking of HMY Iolaire, and the loss of the men onboard.  It remains one of the worst maritime disasters in modern British history, and was a tragedy for the islands.  Many communities in Lewis and Harris have never fully recovered.  The premiere of the work will be over two nights, on November 9th and 10th in An Lanntair, Lewis.  Further details to be announced.