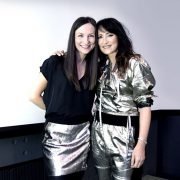 Morning peeps! I am here with news of a new song and a radio broadcast…

I was delighted to be invited to open the new series of the The Quay Sessions with Roddy Hart and alongside my pal, the talented Scottish fireball KT Tunstall a few weeks ago.

I was joined by the finest company a girl could wish for – Éamon Doorley, Duncan Chisholm, Tony Byrne and Donald Shaw. As part of our set, I decided to feature a new work – a work in progress – a poem called Air an Somme by Donald MacDonald, Dòmhnall Ruadh Chorùna, which I was moved to write music to whilst preparing to go and sing at the BBC’s 100 year commemorative service of the Battle of the Somme in Thiepval Memorial, France in July. You can hear Donald and I performing it for the very first time this evening as part of the BBC Quay Sessions set.

KT and I also had a bit of fun, and if you like The Boss, tune in to BBC Scotland at 9pm tonight to hear our duet…..here’s the link to the show, and to some pics to give you a flavour of the night! Lots of fun was had by all. Feel free to share the links, and hope you enjoy.