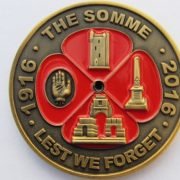 Julie was proud and honoured, to perform a very special song as part of the Battle of the Somme Centenary Commemoration service held at the famous Thiepval Memorial in Northern France on Friday 1 July 2016.

Julie; beautifully accompanied by Tony Byrne (guitar), Patsy Reid (viola) and Alistair Iain Paterson (harmonium); performed a very moving and poignant song entitled ‘An Eala Bhàn’ (‘The White Swan’). This is a song composed by Dòmhnall Ruadh Chorùna (Donald MacDonald of Coruna), a Scottish-Gaelic poet from North Uist, whilst fighting in the battle of the Somme.

Speaking on arrival at the Memorial site yesterday (1 July; the morning of the Service), Julie said:

“It’s a huge honour to be here in Thiepval this morning to mark 100 years since the Battle of the Somme. It’s difficult to put into words how it feels to be here – it’s beautiful, peaceful, solemn, sad, humbling, thought-provoking. It is overwhelming at times to think of what happened here”

The BBC iPlayer  coverage of Julie’s performance is unfortunately, no longer available to view.