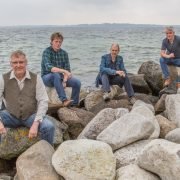 Exciting news – Julie has been announced as Runrig’s special guest for their Farewell concert ‘The Last Dance’ in Stirling’s City Park.   Julie and the band will have the honour of performing a set before Runrig take to the stage for their final two shows.

A limited number of additional tickets are to be released following an agreement between the show’s promoter, LCC Live, Stirling Council and its Safety Advisory Group to increase capacity for the Friday night (17th August 2018) of The Last Dance, Runrig’s penultimate concert.

The extra general admission standing tickets will be released for sale on Friday (27th April) at 10am through Ticketline.

Tickets for the Saturday night show sold out in record time, with the band announcing shortly afterwards that it would put on an additional concert on Friday 17th August 2018; these tickets also sold out.

“We have been overwhelmed by the support we’ve had from our fans for our final live shows. Aware that there is still high demand for tickets, we have been working hard with the concert promoter, LCC Live, to increase capacity generally and to confirm the stage and production details, which in turn have generated some extra tickets.”

“The Last Dance is certainly going to be an emotional experience for us all: an event like non-other in our 45-year history. We look forward to sharing the experience with our incredible fans and special guests for two great evenings of live music.”

More information about Runrig’s The Last Dance concerts will be made available in the coming weeks.