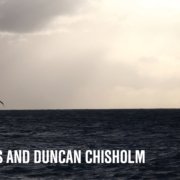 Just announced – on January 27th 2019, Eden Court Theatre in Inverness will host ‘An Treas Suaile’ (The Third Wave) which I was commissioned to write with fellow musician Duncan Chisholm.  Late on New Year’s Eve 1918, HMY Iolaire set sail from Kyle of Lochalsh carrying nearly 300 seamen home to the Isle of Lewis after the war. But the ship was lost at the entrance to Stornoway Harbour and 201 servicemen perished in one of the worst maritime disasters in modern British history.  Written to commemorate 100 years since the disaster, this is a deeply reflective audio-visual piece which has taken 12 months of research and writing.  It will feature newly composed music, traditional material and archive recordings with onstage visuals and projected images. The title and central concept refers to John Finlay MacLeod, who leapt overboard from the stricken Iolaire with a rope and was carried onto the rocks on the third wave. Half of those who survived, did so by means of this rope.  One of only four planned performances around the country, tickets are available now here.